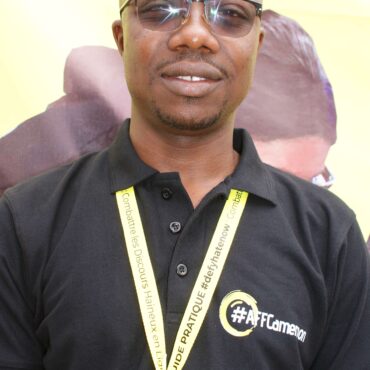 Waji Kiga Elis is an experienced Cameroonian backpack Journalist who currently works for the country’s State broadcaster the Cameroon Radio and Television – CRTV. He is in charge of coordinating all youth-related programs within the CRTV Adamawa Regional Station.

As a multi-talented journalist, Elis has over the years covered several stories in Cameroon’s 10 regions and abroad acting as a Camera operator, Video/Sound editor, and reporter. Through his documentaries and reports on the education of the girl child as well gender-based violence in the Northern parts of  Cameroon, he has been able to change the narratives of women and girls.  .Elis has also carved a niche in reporting political and peace building stories. His works have established bonds within various communities through the promotion of intrinsic cultural and religious values.

He has worked as a Journalist/Editor at Mediafrique radio Douala where he was in charge of creating and supervising news content on a daily basis. Elis has also worked as a volunteer for several private radio stations in Yaoundé, prominent among them being Magic FM.

His flexible nature and ability to write accurately and creatively under strict deadlines, and working with a heterogeneous group made him volunteer as a Communication / Public Relations Officer for the Cameroon Community Development Project (CAMCODA).

Apart from being a Multimedia Journalist with a strong desire to impact society through factual, soul-touching, and compelling packages, Elis is equally a communication researcher. His knack for qualitative and quantitative research earned him a role as a Communication researcher/data collector at the Cameroon National Institute of Statistics. Detailed and verified data he gathered in different households is today helping the government to take accurate decisions for the improvement of the populations’ well-being.

Waji Kiga Elis is the holder of a BSc honors degree in Journalism and Mass Communication from the University of Buea. He also has a diploma as the pioneer badge of backpack Journalist trained at the CRTV Audiovisual Heritage Training and Conservation Institute. He has a burning passion for reporting on peace, justice and strong institutions. Twitter: @ElisWaji