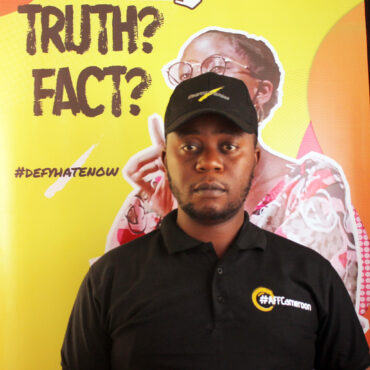 TAMFU Ciduan NDIMBIE was born on the 22nd July 1991 in Nkambe, Donga-Mantung Division of the North west region, Republic of Cameroon, he obtained his First School Leaving Certificate in 2004,

proceeded and obtained his GCE Ordinary level in 2009 at GSS Mbu- Warr and the Advanced level certificate in 2011 in GBHS Ndu still in Donga/Mantung Division,

While in secondary school, Tamfu enrolled into the journalism club and reported   local stories during the regular morning assemblies, he was also part of a team that handled request and relaxation programs over the Savannah Frontier radio Nkambe at the time. Tamfu later joined the Savannah Frontier radio as a volunteer from 2011 to 2013, at the same time he was also running programs with the Millennium Television still in Nkambe.

In 2013, he was recruited at Ocean city Radio, Kumba South west region where he worked as Director of programs till 2020,

Tamfu has also reported for the post newspaper, the Newswatch newspaper, HI TV Cameroon and is currently the editor in chief at Kingdom radio Kumba and chief correspondent with My Media Prime TV for Meme, Manyu and Kupe Muanenguba in the South west region.

Tamfu is trained and certified in; Community Media Practitioners On Media Laws/Ethics and Human Rights in March 2019, Peace Journalism And Elections Reporting With Prof Steven Youngblood (DIRECTOR , CENTER FOR GLOBAL PEACE JOURNALISM) in July 2017, Peace, Conflict And Media for Community Media Network in January 2017, Best Journalism Practice During Conflict June 2021, Humanitarian Reporting. He is currently one of the fellows of Cohort 7 Defyhatenow Cameroon.

Tamfu is always ready to learn and has passion for fact checking and humanitarian reporting; he is also an Award winning reporter as 2019 Best Investigative Reporter organized by the Cameroon Association of English Speaking Journalists Meme.

While Practicing in the English Speaking part of Cameroon, TAMFU  has in several occasions come under attack, he was kidnapped in 2019 while from a news coverage and later released but all his gadgets taken by armed men, he was also one of the reporters attacked in Konye Sub-Division in October  2019 while on a mission during the installation of the Divisional officer of Konye, in 2021, Tamfu was was also en route  to Ekok, border with Nigeria when he was involved in a ghastly road accident which claimed lives, but he was later transported to the hospital in Limbe via a military helicopter for treatment

He is one of the few journalists who have covered stories in Libialem, Manyu, Mbonge, Muyuka and other areas in the southwest region of Cameroon during the Anglophone armed conflict.

All along, TAMFU believes that as a journalist, “one must be ready to walk on broken bottles and banana peelings”