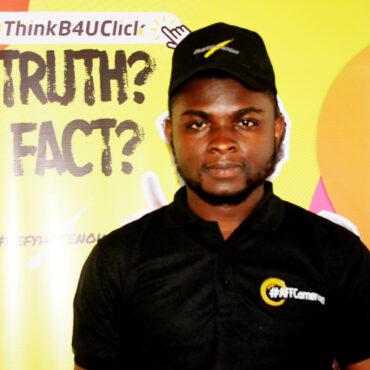 Larry EFFANDE is an African multimedia journalist currently working with Cameroon’s state media. His professional career began in 2014. After spending two years with three private media organs, Larry’s charm and grace found him a place at the Cameroon Radio Television, the CRTV.

Larry was recruited into CRTV in 2016 as a cub reporter and trained in multimedia journalism. By 2017, his hierarchy discovered a potential in him and decided to cast him for TV news presentation. When the corporation launched an all-news channel (CRTV NEWS) on Sunday, January 28, 2018, millions of viewers discovered the face of a 25-year-old boy. As the youngest TV presenter on national television at the time, Larry saw this as a privilege but above all a call to stay on track! Passionate and hardworking, he quickly assumed responsibilities in the all-news channel. From a Primetime News Anchor, business reporter to Foreign News Editor, he was the delight of both viewers and colleagues. Often driven by lyrical words that relate to each story, Larry has reported on peace building initiatives, elections, natural disasters, conflicts, the Major National Dialogue, business and culture. Nothing stops him from going to the margins of every story. His journey is often set to a beat or rhyme creating euphony. He has been among teams dispatched to cover events at Cameroon’s Presidency, the Prime Minister’s Office, National Assembly, and the Senate. As a backpack journalist, Larry was in 2019, assigned to film, write, edit and broadcast stories from three provinces in China during an economic summit. Three years after, he was congratulated by the Director General of Cameroon’s Special Council Support Fund for Mutual Assistance, FEICOM, for extensively reporting live on the 9th AFRICITIES Summit in Kisumu Kenya. Larry was among the four hosts of the CHAN Total 2020 draw ceremony and a multimedia reporter for the 2021 TotalEnergies AFCON. In June 2020, Mediatude enlisted him among top 10 young journalists making great strides in Cameroon. Larry Effande co-founded a nonprofit organization, LIGHT SHARERS, in 2018 which carters for orphans and displaced children in Cameroon’s conflict hit regions. Together with a team of volunteers, they are sponsoring over 20 orphans and have introduced vocational training in a dozen orphanages in Cameroon. The native of Buea holds a BSc. in Journalism and Mass Communication, a Diploma in Multimedia Journalism and a Certificate in Migration Governance and Diaspora Engagement. He is delighted to be an African fact-checking fellow of #defyhatenow Cameroon.