Since October 2016, Cameroon’s two English-speaking regions have been plagued with a crisis that has degenerated into an armed conflict. Strike actions to call the government’s attention to specific demands attracted severe military crackdowns resulting in an armed conflict. Such suppression resulted in the radicalisation of some youths who picked up arms as the best alternative. The civilian population is the collateral damage in the conflict with multiple deaths, arrests and abductions. Cases of kidnappings are reported almost daily, with some victims either lucky to have their release negotiated or face dangerous consequences in detention. Journalists, in particular, face an alarming rate of kidnapping, with well over a dozen journalists kidnapped since 2018 when the crises took a nosedive. Many of the victims face torture at the hands of their captors. Nonetheless, social media has is a vital advocacy tool that has heralded campaigns at exciting levels, leading to the release of some.

According to the United Nations Office for the Coordination of Humanitarian Affairs (UNOCHA), kidnapping has become rampant in Cameroon. Many victims are killed, and some secure their release through the payment of ransoms.

Human Rights Watch (HRW) further corroborates the claim indicating that the kidnapping of politicians, students, clergy, business people, and journalists was on a geometric progression with non-state armed groups accused of being the main perpetrators.

The rise in the kidnapping of journalists in the two English speaking regions remains worrisome mainly as they are always regarded as the mouthpiece of society. Fortunately, social media has facilitated the advocacy drive, which has led to the release of all the journalists arrested. From Facebook, through Twitter, to Telegram, Instagram, WhatsApp, and blogging websites, advocacy has been endless, with news of any kidnapping going viral within the shortest possible time.

On Thursday, February 21 2019, journalist Ambe Macmillan, formerly serving as the President of the Northwest Chapter of the Cameroon Association of English-Speaking Journalists in 2019. When the news of his kidnap was made public, many journalists and civil rights actors took to social media to advocate for his release. Many condemned the act and called for respect for journalists, http://www.xinhuanet.com/english/africa/2019-02/22/c_137840912.htm. 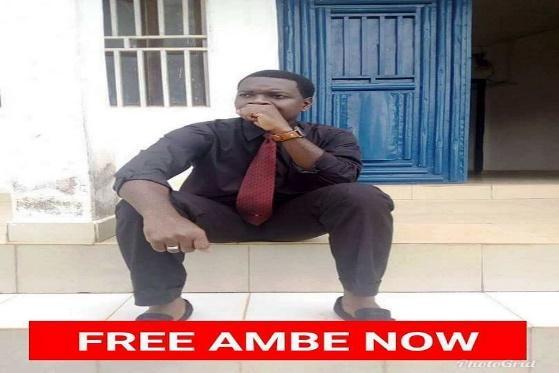 He was released days later when pressure from colleagues and other stakeholders mounted on social media. https://tebopost.com/2019/02/22/freed-journalist-ambe-macmillan-says-why-he-was-kidnaped-hours-after-his-release/

On Wednesday, January 20, 2021, radio host, John Fung Ngum, was kidnapped by unidentified gunmen in Bamenda. A similar advocacy stormed social media, with many calling for his immediate release. The pressure was so enormous that international rights groups picked the story and escalted the advocacy.

Thanks to the pressure on social media, he was released a few days after.

On Saturday, March 13, 2021, CRTV journalist, Fame Bunyui Ayiseh, was kidnapped by unknown gunmen in front of her residence in Muea. The gunmen demanded a sum of ten million CFA to secure her release. Her kidnapping sparked an outrage causing a massive virality, and maximum pressure on the suspected kidnappers. 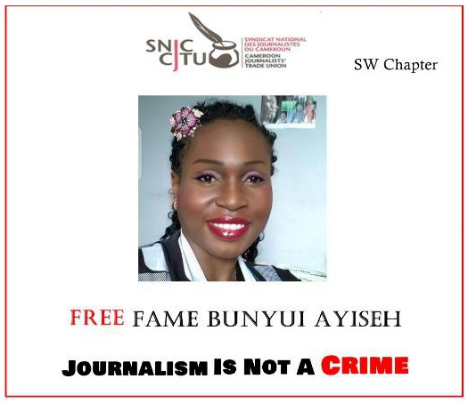 She was reportedly tortured while in captivity as captured by Mimi Mefo Info:

After insurmountable pressure, she was eventually released by her captors with no ransom paid. https://www.crtv.cm/2021/03/kidnapped-crtv-journalist-released/ 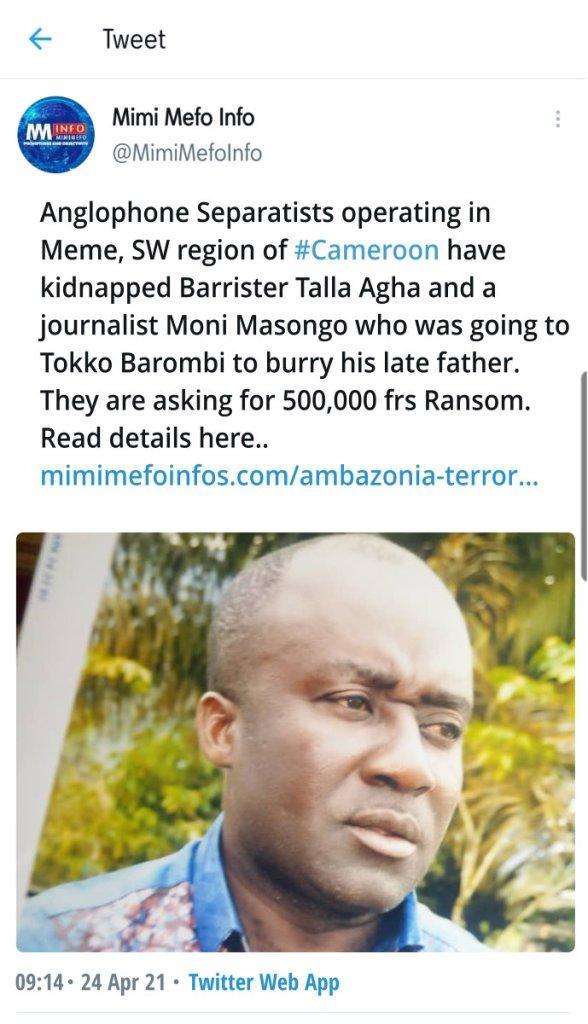 from their bus in Kumba, amongst other passengers and taken hostage by yet to be identified shooters. Moni Banjo, a journalist with Lakeside radio Kumba, and Christopher Talla, a journalist with the Sun Newspaper, were en route to bury the former’s father in the outskirt of Kumba before they were kidnapped together with other passengers. Christopher was later released that day after he dispossessed from all belonging. On the other hand, Moni Banjo was held hostage, and a ransom of five million paved over his head.

Meanwhile, social media pressure mounted to advocate for his release grew beyond lips and bounds, secured his release. 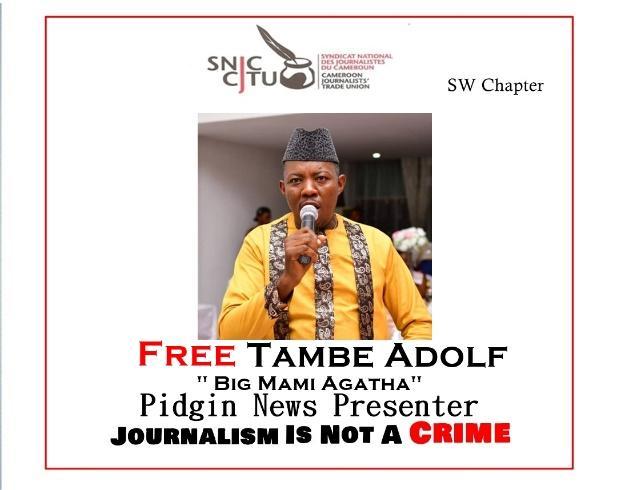 On May 13, 2021, Adolf Taborazi Tambe, Pidgin news broadcaster with Eden Radio Limbe, was abducted at his home in Mile, Bonadikombo, by unknown gunmen. Like always, there was a massive campaign online to secure his release. Journalists from all walks of life left no stone unturned in advocating for his immediate release. He was eventually released on May 14, 2021.

In less than one year, a total of seven journalists have been kidnapped by alleged separatist fighters. The number, very alarming, comes into size-up the level of insecurity that prevails in the two English speaking regions and how hostile and unconducive the environment is for journalists to work in the areas freely. Besides the arrests, many journalists from the two English speaking regions have testified of the verbal and psychological torture they undergo on an interval basis.

Fortunately, the timely intervention of colleagues across the country secured the release of the abducted with no ransom paid for anyone. This shows the strength of social media in advocating for the life of the oppressed.

In as much as there is virality in the advocacy for the release of journalists kidnapped, it has proven that most of the images emanating from the abductors’ hideouts are also erroneously hyped by the same journalists. Such images are entirely inundated with very explicit contents not suitable for public consumption. Such is the case with Fame Bunyui, whose 55-seconds video went viral on social media, with some using it as an advocacy tool. Such contents infringe on the privacy of the victims.

For advocacy to yield sustainable results, it should be followed by generating some specific hash tags used under every post favouring the said journalist or victim.