Cameroon confirmed its first case of Coronavirus case on the 24th of February 2020. Health officials immediately took measures to contain the spread of the virus, but it wasn’t enough due to poor government strategies and a defiant population that failed to respect measures. This led to a second phase in March 2020, which saw the Minister of Public Health announce that over 44 people had died of the virus. It was a huge task to convince the population of the reality of the virus, and why they should do observe the regulations placed by the government. In March 2021, the Ministry of Public Health announced the second wave of Covid-19, with Cameroon recording 61,731 cases, 6,926 recoveries and 919 deaths. The government launched the first phase of its vaccination campaign the same month after the arrival of 200,000 doses of the Chinese donated vaccine, Sinophram. The Chinese Covid-19 vaccine, Sinopharm, Britain’s, AstraZeneCa, America’s, Johnson and Johnson, and Russia’s, Sputnik V were the four vaccines approved by Cameroon’s National Scientific Council and National Immunization Technical Board as reported by the country’s state media (https://www.crtv.cm/2021/04/covd-19-four-vaccines-on-cameroons-vaccination-plan/). Cameroon received 391,200 doses of the AstraZeneca COVID-19 vaccine on April 17, 2021, and 4 million doses of Johnson and Johnson are also expected soon.

The vaccines were quickly dispatched to 243 vaccination centres across the country’s 10 regions. The Minister of Public Health, Dr Manaouda Malachie announced during a press statement on the 7th of April, that the vaccine will be administered free of charge. He also said for the first consignment, persons above 50 years, health workers, persons with health issues, government officials will be prioritised. Today, anyone from 18 years except pregnant women is eligible to get a vaccination dose.

However, since the campaign was launched, the country with over 25 million people has registered less than 80,000 vaccinated persons against the virus. Several persons have shown disapproval of the vaccine after being influenced by peers, influenced misinformation, disinformation and mal-information on social media, influencers and preachers amongst others.

The impact of social media on vaccination hesitancy could be dated back to the origin of the virus, where conspiracy theories were shared on social media platforms, blaming the white man for exploiting Africans, killing Africans and end time. 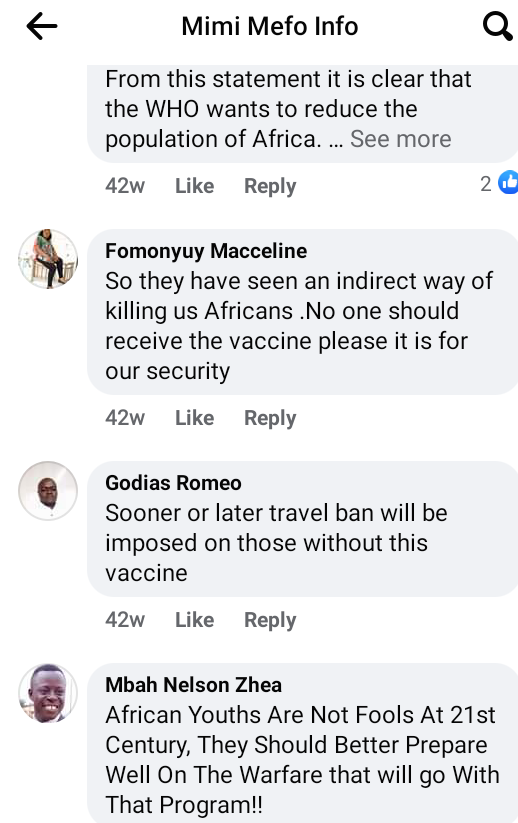 Bill Gates, was one of those accused of being linked to the Coronavirus after he did a talk on sterilization and population control. The video (https://youtu.be/Tg5AIo6K-Xs) viewed by thousands of people misquoted Bill Gates, claiming he said “at least 3 million people need to die”. This video circulated in Cameroon creating animosity and disbelieve towards anything related to Covid-19. Although fact checkers have since debunked this rumour.

The rumour expanded to claims that Bill Gates planned to insert a chirp in the vaccine and sent to Africa to reduce its population. Below is a screenshot of some Cameroonians reacting to the vaccine under a Face book page (MimiMefoInfo) https://web.facebook.com/MimiMefoInfo/posts/4001323043245576?_rdc=1&_rdr

When vaccination campaigns were launched, Cameroonians were keen on seeing top government officials get vaccinated. Some even stated that until they saw the Head of State, President Paul Biya taking the vaccine, they will not believe in it. Even when these Ministers did take the vaccines, the misconceptions continued. Calls were made on social media and others who didn’t see pictures of President Paul Biya or other top officials taking the vaccine, spread rumours that it was fake and advised others not to get vacinnated. https://tebopost.com/2021/03/06/covid-19-vaccine-paul-biya-should-lead-by-example/?fbclid=IwAR0wX-kMrfhPygGV7S7XYmsHvduvyUQZpCXMS1qCTh2QDqoxaVGOg5UFFDI

Following a Covid-19 vaccination campaign launched in the North region on the 14th of April, Cameroon-info.net (http://www.cameroon-info.net/article/cameroun-campagne-de-vaccination-contre-le-covid-19-le-secretaire-general-des-services-du-gouverneur-397863.html), the social media news site reported how a government official launched the campaign but ‘escaped’ the vaccination process. This story was read by over 2000 persons.

The influence of traditional remedies on social media also made several people cancel plans to go for a vaccine or Covid-19 test, as many believed and quoted these traditional healers who created a mixture of herbs to ‘cure’ Corona. They were supported by some social media influencers like Richard Bona, a Cameroonian artist who has taken Ghanaian nationality. Bona attacked the World Health Organisation (https://cameroonnewsagency.com/vocal-cameroonian-artist-tackles-who/) for castigating traditional cure to Corona Virus, a move that was appraised by his following. On his May 12, 2020 post on Facebook, he stressed that traditional medicine is more than 2000 years old, unlike this organization which has only existed since 1948.

The impact of the ongoing socio-political unrest in the North-West and South-West regions of Cameroon has also played a part in discouraging locals. Some separatist fighters and sympathisers openly threatened locals not to receive the vaccine. https://twitter.com/sc_amba/status/1381616276829786113?s=20-

Evangelists, Preachers, Prophets, and Apostles of God as they are often called by their followers have contributed immensely on their social media platforms to dissuade Christians from taking the Covid-19 vaccine.

*Below are links to a list of prominent Pastors followed by Cameroonians who warned against the Covid-19 vaccine and their videos went viral. Some of them said it was the mark of the Devil, others asked Christians to pray, some said they will not be forced to take the vaccine even when faced with a life threat.

On the social media app Tiktok, a space many Cameroonians are getting acquainted with, some users developed content on the Covid-19 vaccine challenge.  The video shows the immediate side effect of the vaccine, which gives the impression people get nuts when they take the vaccine. Although this originally started as some kind of fun, it played its own role. It scares and gives reasons to those who have doubts about the vaccine, not to go for it. (https://youtu.be/nPqC9fpYXbs) link to a compilation on Tiktok.

This social media impact also affected education. In an article published by the Voice of America on the 22nd of February 2021, the author, Moki  Edwin Kindzeka portrays the country’s education authorities lamenting the absence of children in schools, who were pulled out by parents after rumours circulated on social media that kids will be administered the Covid-19 vaccine. These education authorities claimed thousands of children from at least 15 schools had not shown up on a Monday morning, after social media postings. The article quotes a police officer saying rumours on social media indicate the vaccine will cut down the population of blacks in Africa. Cameroon-info.net through this link (http://www.cameroon-info.net/article/cameroon-three-students-injured-as-covid-19-vaccination-rumour-throws-kumba-into-panic-395382.html), claim three children got injured during a stampede on campus after it was rumoured health workers were coming to vaccinate them.

The fear of Covid-19 vaccine also affected other immunization projects. It perturbed vaccinations for children 0-5years as medical authorities said over 200,000 children didn’t receive their routine vaccinations in March 2020, when the country had its first corona case announced.  VOA reported (https://www.voanews.com/africa/fear-covid-19-stopping-childhood-vaccinations-cameroon.) that parents refused to take their kids to hospitals because they fear the kids will be injected with the virus in the name of a vaccine.

The Government of Cameroon has plans to vaccinate five million people by the end of 2021 and 15 million by 2022. (https://reports.unocha.org/en/country/cameroon/card/1D7RNQ8SRM/). Recently, Facebook has been assisting governments to trim false claims on its platform related to Covid-19 vaccines so as to boost response. Claims removed include Covid-19 is man-made, vaccines are not effective, vaccines are dangerous among others. The government has a lot of work to do in its communication strategy and it should work with fact-checkers to debunk false claims whenever the need arises. According to WHO, from January 3, 2020, to the 28th of June 2021, there have been 80, 487 confirmed cases of COVID-19 with 1 320 deaths. As of 28 June 2021, a total of 110 324 vaccine doses have been administered.